Our meetings, are held on the first Saturday of the month. They are energetic, heartwarming, comforting and a transforming event. Meetings held at the Shelton E. Dole Center 250 So 6th Avenue Mount Vernon 10550
Email: 3dclothdollclub@gmail.com 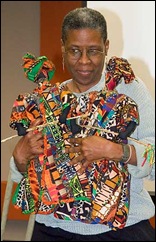 Naomi Shelnut was recently awarded the April Quilter of the Month by the Empire Quilters Guild in NYC. Naomi began quilting close to 20 years ago when her husband was ill. Naomi would stay up late working on quilt blocks (mostly appliqué) and embroidery as well. She tried her hand at many textile related art forms while she shepherded her husband through chemo and radiation. Naomi joined Empire in the early 1990’s shortly after her husband passed away. She shifted her focus to dollmaking about ten years ago and has been particularly interested in making dolls of African descent as well as stuffed animals. Naomi is a member of Quilters of Color Network NY — where she recently led an African Queen by Kooki Davis workshop, as well as a member of The City Quilter Doll Club, and the 3D Doll Club of Mount Vernon. Her daughter Stacey, Director of Education at Sacramento Museum of Art in California, loves everything her does — including Naomi’s favorite doll: The Storyteller!

To view a full gallery of Naomi’s work visit: the Empire Quilters Guild